Since our initial turn in testing smartphone audio, I’ve had a lot more time to play with the APx582 from Audio Precision. I’ve also received far more feedback than I ever expected to on this subject. I have made a few changes to the testing method that I’m going to outline along with discussing some of the reasoning behind the changes.

All tests are now run manually instead of automated over USB

For most phones, running over USB and running them manually provide the same results. For a few, the commands sent with adb to adjust volume result in a higher maximum volume than you can select with the volume buttons. This causes results that are not correct for real-world use.

Note that non-Android phone testing will be identical. The test tones can be manually selected and used regardless of platform. I will try to determine why this happens, as there is the potential for other software to also set the volume control too high. I’m most concerned with results that match real-world usage and this does that better.

Before I used common headphones (Apple earbuds, Grado SR60s, and AKG K701s) as my loads. While more real-world than resistors, they also present more issues. They have a nominal impedance, but their impedance might be low in the bass and high in the midrange. If you only base results off the nominal impedance numbers, you can mis-interpret charts.

Duplicating the results also becomes a challenge. The parts used in headphones can change during production. Someone trying to match up their results to ours may not be able to achieve the same data with what they believe are the same headphones. A resistor has a tolerance as well, but with fewer variables it is easier to interpret the data and replicate the results.

For the dummy loads, I selected 15 Ohm, 33 Ohm, 150 Ohm, and 330 Ohm loads. During testing I load each channel with the same value of resistor. The Audio Precision software calculates the wattage from the resistor and voltage.

The standard Audio Precision smartphone project produces lots of charts. Seriously: a lot of charts. It is easy to include every chart in there but most often they aren’t needed. Instead I plan to summarize the data into a nice table form and include the charts that are indicative of performance. If a chart shows nothing new or unusual, I likely will not include it. If a new chart helps to explain what is going on, I will include it. So sometimes you will see a chart and sometimes you won’t depending on what it shows.

I will pull almost all charts from the 33 Ohm loads. This is the the closest to real-world earbuds for most people. There are a lot of earbuds that drop down into the 16 ohm range, and you should look at the 15 Ohm results for those. Since this is a harder load to drive you are most likely to see worse results than with easier loads. People using over-ear headphones with impedances in the 150-300 Ohm range should use those results. This is easier to drive, but also is going to output far less power in watts so you need to pay more attention to those numbers.

This first round-up includes the HTC One M8 and the Samsung Galaxy S5. This is also purely objective listening. My time with the phones is usually short and I don’t have the time to offer my subjective opinion on the audio quality. I will leave that up to the original reviewer.

Looking at the numbers for the HTC One M8 there are a few things that stand out. The first is the output power of around 1.2 Vrms for all loads. This is a lot of power for a smartphone and should be able to drive almost any set of headphones you would use with it. There is more distortion on the 15 Ohm load but as there are 95 mW at max volume, you should be able to step the volume down a bit and reduce the THD+N.

We also see that crosstalk gets better as we have an easier load to drive. The lower (more negative) the crosstalk is, the less noise is leaking from one channel into the other. This is also the test most subject to error when using the USB automation of the phones. On the HTC One M8, USB testing results in a crosstalk level of -0.01 dB. If you are using your HTC One M8 for music you are best to not have it connected over USB while listening.

For some of the other results, I am going to pull in some charts that help to explain it better. 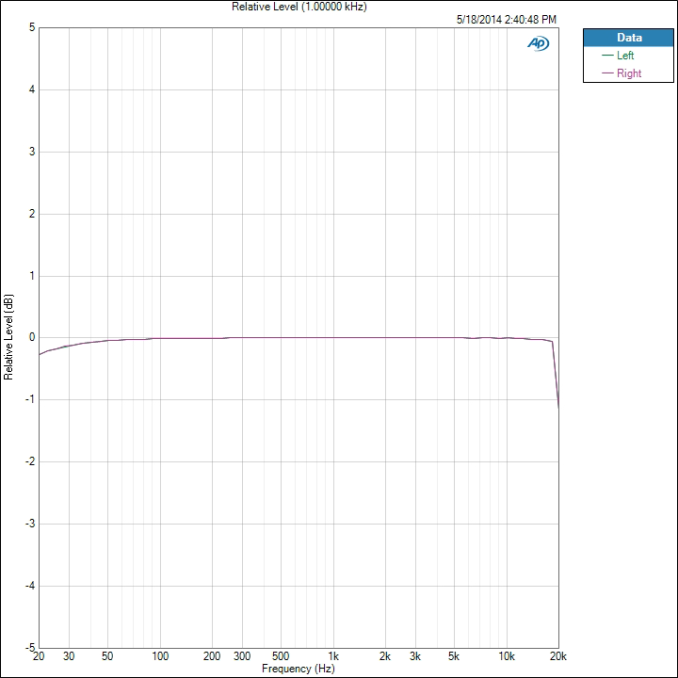 Relative level shows it is flat until the 20 kHz tone. Since most people can’t even hear this, the fall off there isn’t a large deal. The fall-off at 20Hz, which most earbuds cannot produce to a reasonable level, is much more slight and not audible. Unless you are playing back music for your puppy with the HTC One M8, this result is fine but it could be better. 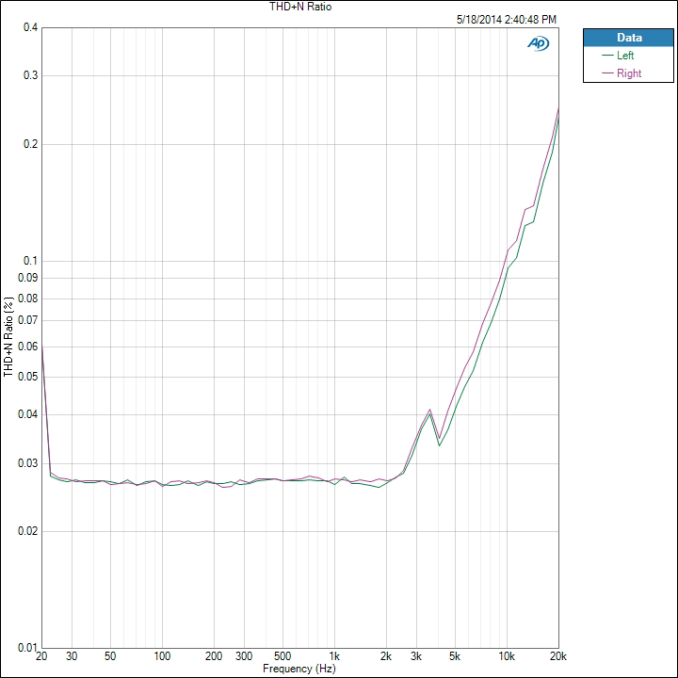 THD+N is below 0.03% until just after 2 kHz when it begins a slow rise up past 0.2% at 20 kHz. This winds up being a good number but I am unsure what causes the rise in THD+N as the frequency increases. 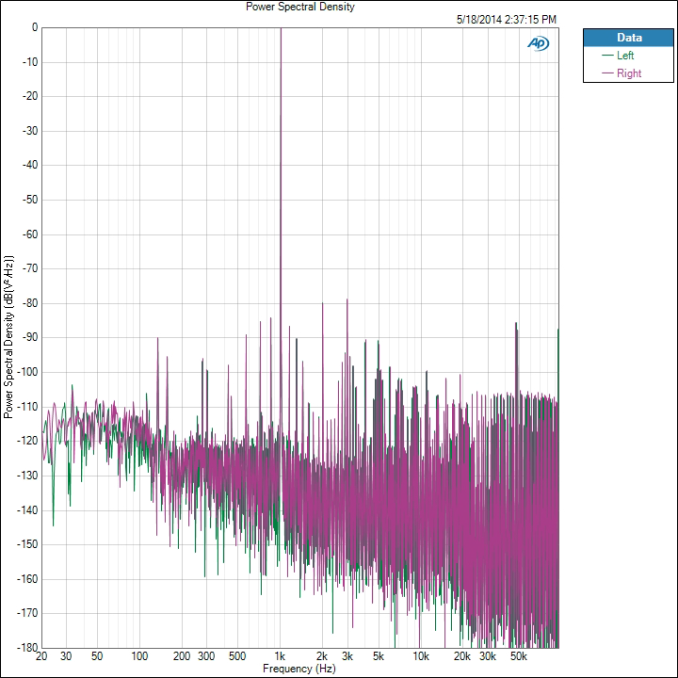 The FFT spectrum for the 997 Hz test tone shows all artifacts below -80dB compared to the fundamental. The second and third harmonics are the largest, and those drop off by -10dB by the 4th and 5th.

This graph compares the frequency response to the BoomSound feature to having it disabled. As we saw earlier the regular frequency response is flat with a steep fall close to 20 kHz. Looking at BoomSound we see a steep roll-off below 30 Hz, a peak of almost +5dB around 60 Hz, a -5 dB section between 200 Hz and 500 Hz, and then a steep rise in the treble past 2 kHz.

Since I didn’t do the subjective listening, I would expect this to sound harsh in the treble, with the midrange being washed out by that dip in the middle. What we have is a high-end and a low-end that is +10 dB compared to the midrange. So these will sound twice as loud to you as the midrange. Using the interactive chart of music instruments by frequency you can find here, you can see what instruments this will obscure.

Comparing the THD+N ratio of BoomSound On to Off shows far more noise and distortion as well. If you want boomy bass, a harsh top-end, and no midrange, then use BoomSound. A better choice is to find headphones that suit your listening preferences more.

The HTC One M8 has good looking numbers, but putting them into better perspective requires more phone testing. As it is I see nothing that stands out as being a problem, unless you leave BoomSound on.

Compared to the HTC One M8, the Samsung Galaxy S5 has a worse audio system. It only puts out around 20% of the wattage of the HTC One M8, making it less likely to be able to drive every headphone to a reasonable level. The THD+N on the 15 Ohm load is lower with the Samsung, but it is putting out half the power and under a quarter of the watts of the HTC One M8. If you drop the HTC One M8 down a single volume level it will still be far more powerful but likely have lower THD+N.

Dynamic Range is almost identical between the two phones, and close enough that you will not hear a difference. Crosstalk is a major difference as the Samsung is -20 dB worse here than the HTC One M8. You are likely to hear sound from one channel in the other ear. This can reduce the size of the stereo image and present the music as being more unfocused.

The relative level is better on the Samsung but I don’t think anyone will be able to hear the difference between the two.

Compared to the HTC, the THD+N on the S5 is much higher. Whereas the HTC only passes 0.2% around 20kHz, the S5 is past 0.25% for the entire time on the stepped frequency sweep. The Right channel shows higher THD+N values than the left channel, while the HTC is identical in both channels. I checked the graph for every impedance load and they all look identical to this so it isn’t an error in measurement.

Unlike the HTC, the frequency response of the Galaxy S 5 is flat out to 20kHz. It has the same meaningless drop at 20Hz as well. Again I don’t think anyone will hear the difference, but the Samsung is better. 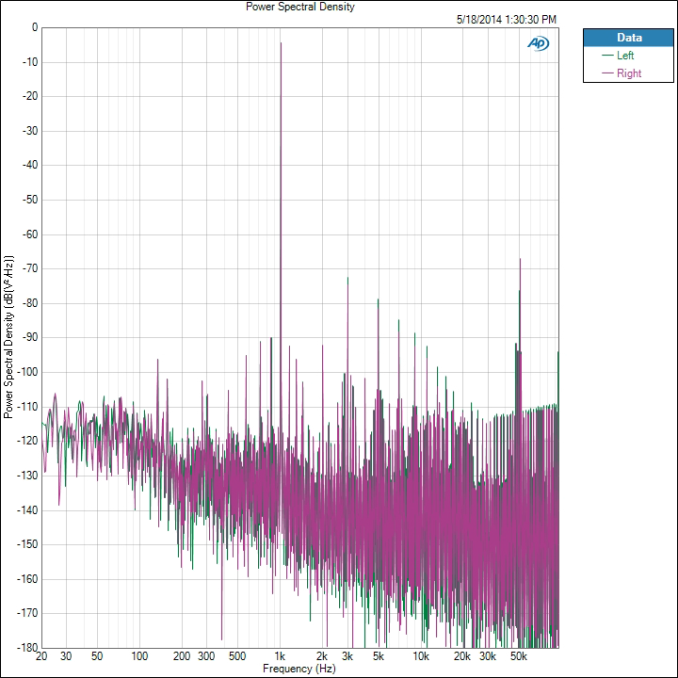 Unlike the HTC One M8, there are no sound modes to play around with in the Galaxy S 5. With these two flagship phones for 2014, the HTC One M8 is packing the superior audio system. Is has a more powerful amplifier at all levels, lower crosstalk, and lower THD+N. The relative frequency response is worse but not by an audible amount.